I make my thousand layer spice cake or “spekkoek”, (the Dutch term for bacon cake as the dark and light layers reminds of bacon) in a 24 ø cm spring form. My mother made “spekkoek” for special days. It comes initially from Colonial Indonesia (Dutch East Indies). It is a lot of work, approximately 3-4 hours. The last time, it took me 4 hours as I did not have ground cloves nor ground aniseed. I had to use the mortar and pestle to grind whole cloves and whole star aniseed. But the result is always there. A lot of work, however I have never experienced someone who did not like Thousand Layer Spice Cake.

500 g real butter at room temperature (use the paper where the butter was wrapped in, to grease the spring form), 10 small eggs or 7 large eggs at room temperature, seeds scraped out of 1 vanilla pod, 3 t vanilla essence or 5 t vanilla sugar (In case you don’t have either vanilla sugar nor essence, seeds scraped out of another vanilla pod will do. Just use the leftover pods in a closed container with sugar for the next time.), 400 g castor sugar (use half with the butter and half with the yolks), 100 g flour, 1/2 t salt, 2 T fresh cream (or full cream milk if you don’t have fresh cream) 10 t ground cinnamon, 5 t ground aniseed, 3 t ground nutmeg, 3 t ground cardamom, 3 t ground cloves, 100 g melted butter for in between each layer of the Thousand Layer Spice Cake

1. Mix the butter with the vanilla essence and half of the sugar in the food mixer. Scoop it over in another bowl as you need to use the very well cleaned and dried food mixer later for the egg whites again.

2. Divide the eggs from yolk and egg white and keep separate

3. Add the rest of the sugar in your bowl with yolks and mix this well

4. Mix the egg whites until stiff in the food mixer. Make sure there is no liquid left at the bottom.

5. Stir with a wooden spoon the butter-vanilla-sugar mixture with the mixed egg whites and the yolk-sugar mixture

6. Add the flour and salt and stir in the fresh cream (or milk) well

7. Equally divide this mixture into two bowls. Add in one bowl the spices. This mixture is becoming brown and the other one stays cream.

8. Turn on the grill in the oven (my oven has a button for the grill position and a separate button where I also need to add the temperature to the highest position)

9. Add one large serving spoon of the cream mixture in the spring form. Put the form on the grid ¼ away from the grill element. See photo. 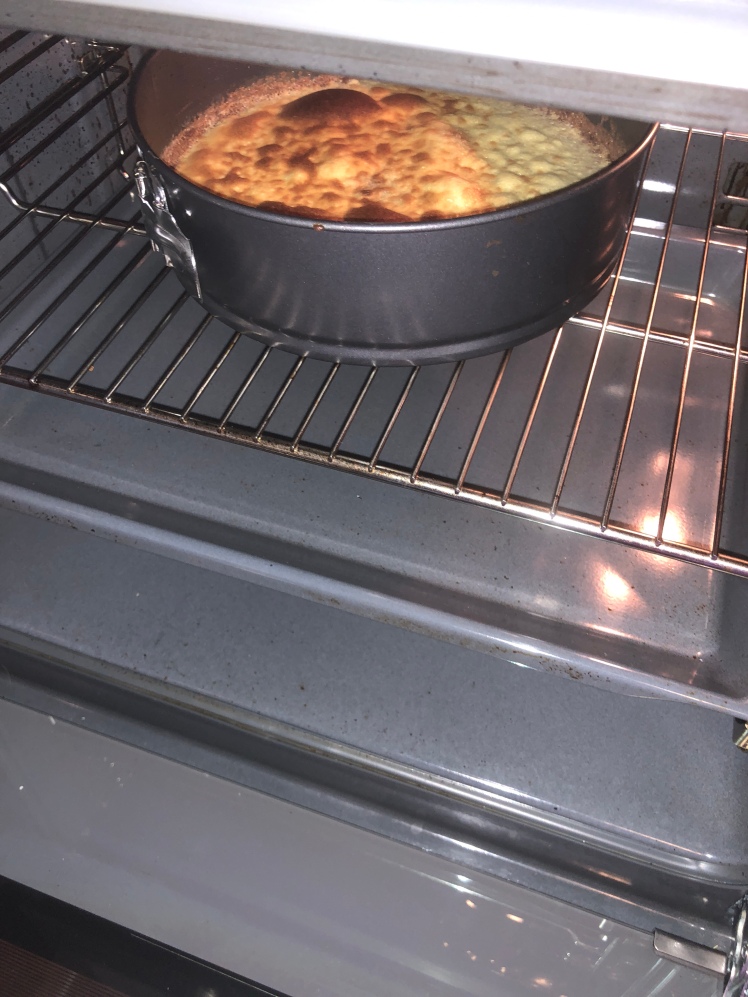 ¼ away from the grill element

10. Put a chair next to the oven as it is a long process and you might want to take a seat in between.

11. Start with the cream layer. This layer is done after approx. 4-5 minutes. Watch it as my oven takes 4 and with the previous oven it was 5 minutes. Take the form out the oven and brush some butter onto the layer.

12. Add now a layer of the brown mixture, roll it around until it has melted and follow the steps 10 and 11 until you are finished with the mixtures. Set the alarm at 1 minute interval for each layer. (Only the 1st later is 4 minutes!) After this minute, check your layer, it should look like below photo and it might take up another 20-30 seconds depending on your stove.

13. Once finished all layers, switch off the oven, put the grid on the lowest level and keep the cake in the oven for another 5 minutes. Check that it all goes well.

14. Once finished, let it cool off and cut the edges of the spring forms loose with a spatula

15. Turn the spring form on a grid and you are ready to serve

SERVE Cut the Thousand Layer Cake in thin slices or triangles (remember it is very rich) and add some fresh strawberries, a spoon of sweetened whipped cream or vanilla ice cream

KEEP the cake with cling film in the fridge

Delicious with a cup of coffee or rooibos tea

TIP If you don’t have cardamom, add 1 t ginger

MUSIC Another Cup of Coffee by Mike and the Mechanics, but I also love their song “The Living Years”

Romance of this recipe: I made many Thousand Layer Spice Cakes in The Netherlands, South Africa and Italy, and today for the first time in Spain. Good memories come back. Me sitting in the kitchen where my Mum made “spekkoek” and me licking out the bowls. Always happy if none of my sisters were around and I could eat out of two bowls. Yummy!

And that day at Restaurant Spandershoeve in Hilversum, The Netherlands where I bought one as I was too busy in my work life to make one myself.

It might sound strange but out of my auntie Laan, my Mum and myself, I make the best Thousand Layer Spice Cake. I believe it is because I use butter in between each layer and fresh cream instead of milk.